The Truth About Reckart's Group

- March 13, 2013
THE TRUTH ABOUT RECKART'S GROUP The semi-Anti Semitic Group:

In reality, these people are anti-Semitic for the very fact that they won't believe in the existence of the Hebrew language which was first spoken by the people of God from Adam to Noah.  Bishop Reckart said that there's no such thing as Hebrew language.

In further investigation as you talk and discuss with their theological stands, you will learn that these people don't have a set of strong and concrete references of their doctrine where they care not the value, the importance of providing credible materials as far as proper research and study is concern.  They will always fail to present credible materials when you ask them instead insist their understanding and interpretations in the manner of "eisegesis" method.  They automatically block you on threads where you question them most especially when they sense being cornered on subjects being discussed.  They will also brand you a liar and of the devil if you try to expose their errors.

Most of their teaching were taken from links that favors their interpretation where James Owens made his best to take and paste together pictures depicting the works related to the Masons, Illuminati, the Gnostics and labeling it according to what he had perceived.  Here are few of it I was able to save below: 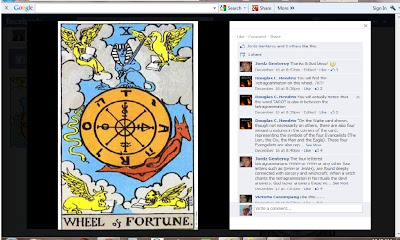 2.  Branding the tetragrammaton "YHWH" - four Hebrew consonants of whom Moses himself wrote, associating it to Baal.  They call Baal Yahweh or Lord, so this would mean "Lord Baal" to them. 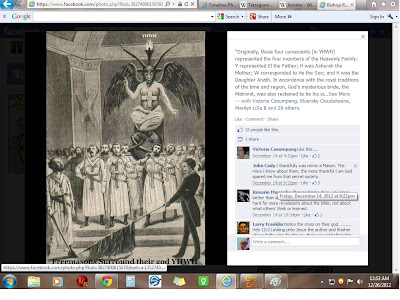 3. They also uses book illustration wherever they can find a word related with "tetragrammaton" or 4 Hebrew Letters and defiling it. Look how James Owens maneuvered by labeling it. 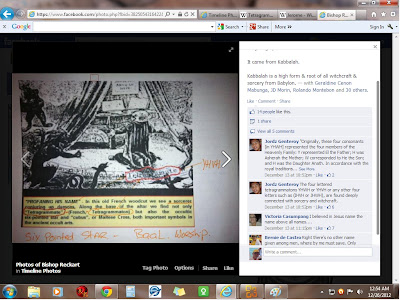 4.  Look closely how James Owens blasphemed the tetragrammaton and link that to the "one eye" or Lucifer's eye. 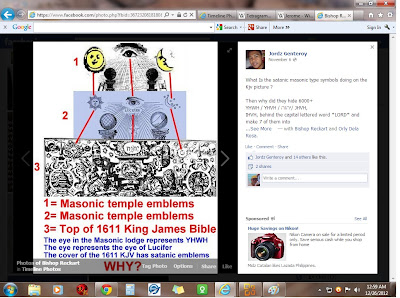 5.  This image is a Kabbalah's illustration. 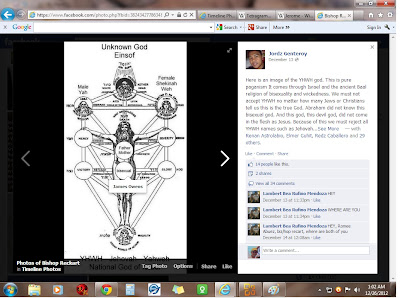 6. James blasphemed the God of Israel "YHWH" calling the sacred word evil and the devil who was calling his goats to hear him. 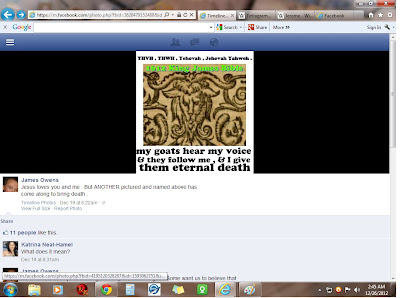 7.  James is good in storytelling. Out of a picture he can create bunch of baseless maneuvered stories associating it to evil assumptions. 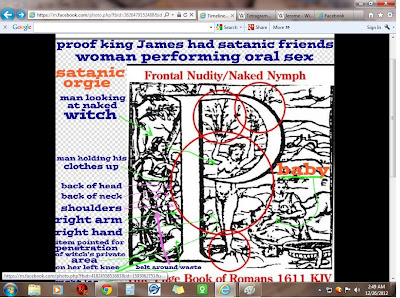 8.  "The Oneness of God" written by a Doctor of Jurisprudence, a humble and respected man of God was not able to escape from James wicked mind.  He attacked his writing without even asking permission and made inquiry direct to its writer about his questions but blatantly accused him. 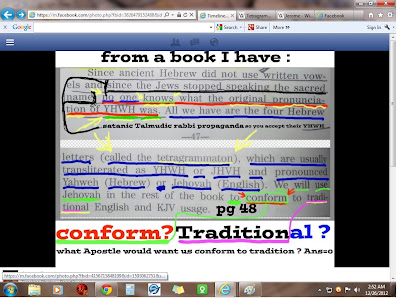 9.  A picture of a rabbi where James placed his words in his mouth.  Does the Rabbi really utter those words?

10.  The Kabbalists, known as heretical and unti-ethical to Judaism now had this new revelation.  James Owens doesn't know how to read Hebrew and don't have any background of studying Hebrew language.  You will notice that in his work here.  YHWH (Yod, Hey, Waw, Hey) or tetragrammaton isn't read as Yhowshuwa. The Masoretes added vowel pointings to the original Hebrew words which are all consonants like for example the rendition of Jehovah or Yahweh, the Masoretic text.

Yhowshuwa or Yehushuwah is the Hebrew translation taken from the word "Iesus" which is Greek.  Jesus is the English translation and "Hesus" in tagalog.  The name revealed to this Jewish sect Kabbalist rabbi was Yehushuwah or Jesus when translated to English.  James called it lying signs and wonders.  He's obviously wrong to say Yehushuwah (Hebrew) is tetragrammaton for it simply means Jesus in English not YHWH. 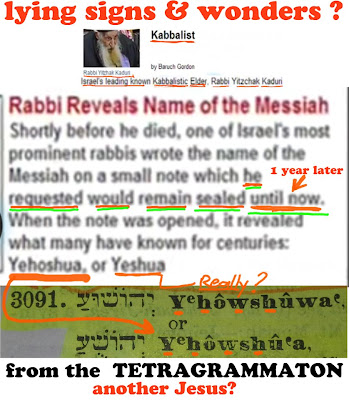 Their Strategy of Fishing to Other's Pen

They will send you these tags (seen above) in your facebook account continuously as baits.  Most were in their friends list  as what Jordz Genteroy did. This is their backdoor strategy.  They can determine if you're a good fish to catch in the number of times you'll be liking their evil stuff.  This will be followed by sending you messages and other links through private messages if you reply to them.  By series of conversation, what comes next is the schedule for seminars they will be conducting to your place and finally, unknowingly they victoriously entered  and captured your camp as they will forcefully suggest to you the need for rebaptism. They will destroy the credibility of their candidate's organization by looking loopholes like the Articles of Faith especially the UPC.  Who were their victims?  The innocent and those who are weak in faith. 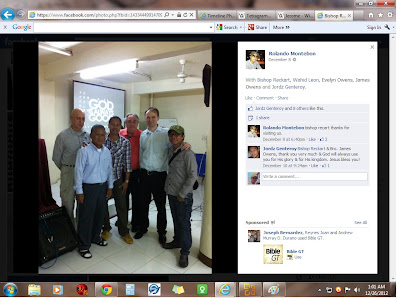 Next Topic to be discussed:

The Chaos they brought to UPC Philippines
Spot the lies they made, there are plenty

Ptr. Ver Baltazar words when interviewed by the District Board. (Hear his testimonies in audio)

How Jordz Genteroy admits their intentions of fishing UPC members and the members of Ptr. Louie Santos in "To God be the Glory Fellowship".

HOW A DECEIVED PERSON REASONS OUT?  (A UPC member in London deceived by James Owens)

Popular posts from this blog

- August 16, 2013
Hebrews 1:8  "But to the Son He says, 'Your throne O God'? The Trinitarian Claim Trinitarians claim God (the Father) is calling the Christ "God." Examination of the Claim Hebrews 1:8 is a quotation of Psalm 45:6. The above translation of Hebrews 1:8 is another example of extreme Trinitarian translation bias. Here they outrageously try to claim that God is addressing the Christ as "God." Their translation is not the most natural reading of the original Greek text and it crudely violates the context in order to promote Trinitarian doctrine. Trinitarian Greek scholars themselves openly admit the Greek grammar does indeed allow for a different translation. Therefore, the proper translation of this passage is not a Greek grammar question, but a question of theological interpretation in order to determine which one is correct. For example, the RSV, a Trinitarian version, translates the original passage quoted here as, " Your divine t
Read more